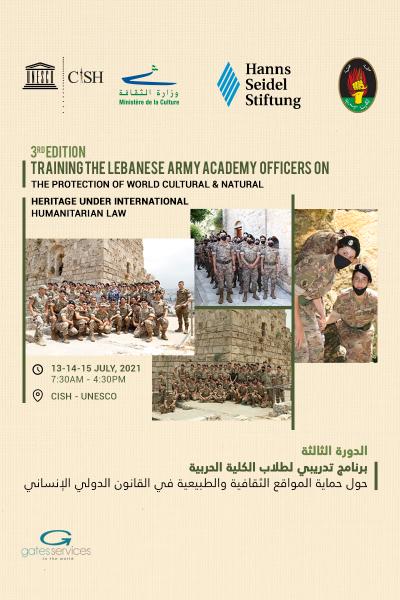 For the third consecutive year, the International Center for Human Sciences (CISH) – UNESCO, Byblos organized in partnership with Hanns Seidel Stiftung, a three days training on July 13, 14 and 15, 2021 intended to the Lebanese Army Academy Officers on the “Protection of World Cultural and Natural Heritage Under International Humanitarian Law”.
The activity aimed at introducing the history of the ancient city of Byblos, as well as highlighting the importance of humanities and the role of military in protecting our identity, history and cultural heritage under International Humanitarian Law.
An opening ceremony was organized on July 13, 2021 in which the CISH director – Dr. Darina Saliba Abi Chedid and the Hanns Seidel Stiftung resident representative – Mr. Kristof Duwaerts highlighted the importance and the great impact of this training program.
The program included presentations and interactive workshops by prominent speakers at the CISH premises, as well as a guided tour in the historical Byblos Citadel.
At the end of the three-day training, the Commander of the military Academy General Georges Sakr visited the Center and participated in the closing ceremony with the CISH director – Dr. Darina Saliba Abi Chedid.