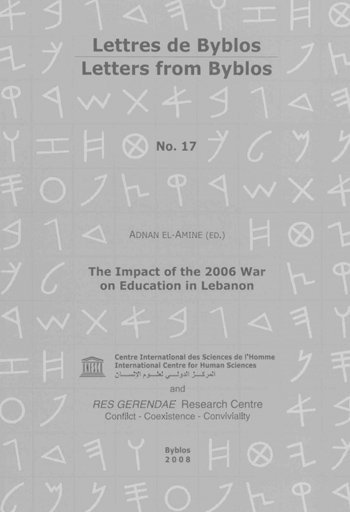 “July 2006 war was a disaster for the Lebanese in general and for the people in the South and Al-Dahia in particular. Certainly, it was a flagrant Israeli aggression, led to what it led from the loss of lives and properties to psychological trauma in adults and children. This book is a quick look by the authors on what happened to the educational sector of material, structural and educational losses. They talk about the efforts, initiatives and measures that sought to compensate losses wherever possible, and the dynamic action to face and overcome these effects in a record time, also the cooperation between the civil society, public authorities, international organizations and Arab countries. The most important that the authors conclude ideas and lessons learned that can be built upon”……..

Preface
Chapter One: The institutional damage caused by the July war in schools (Arabic)
Chapter Two: The psychological and educational effects of the July 2006 war on children and students in Lebanon (Arabic)
Chapter Three: The efforts of reconstruction and restoration (French)
Chapter Four: Dealing with war effects: A partnership activity under the auspices of Al-Mabarrat Association (English)

“Since the start of the civil war in Lebanon in 1975, and throughout the wars and conflicts between Lebanon and Israel from 1970 till 2006, His Eminence Sayyid Mohammad Hussein Fadlullah was one of the first persons to address the social repercussions of the war and the human tragedies and disasters that it brought to thousands of Lebanese families.
In 1987, His Eminence established Al-Mabarrat Association as a charity and public service association, to care for the victimized orphans of the successive wars”………..