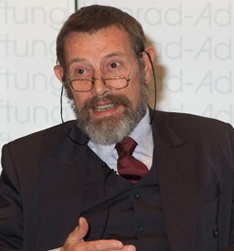 – He continued supervising the studies of the Center until 2008.

– Research professor at “German Institute for Research and education”