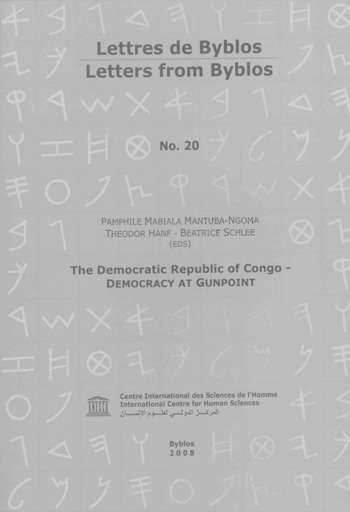 “The title of this book prepares the reader for an account of nearly 16 years of political change in the Democratic Republic of Congo. From 1990 to the 2006 elections the process of democratization went hand in hand with bullets. Political violence could jeopardize the process at any time. To hold onto power, violence was necessary. To snatch a patch of liberty, violence was indispensable”…….

A country doomed to pillage?  The Congolese crisis in historical context
The Congo Free State:  A private mining company runs as an absolute monarchy
The Congo, a model paternalistic colony
The “Congolese swarms”
Afro-militarism: one country pillaging another
The open militarization of the intra-African relations
From the erosion of alliances to the outline of a peace settlement
Memory of terror in the occupied regions
The pillage of Congo’s resources
Geography, geo-economics and geopolitics:  Reflections on the Congo and the concept of the “Great Lakes”

The demographic reality in the post-conflict Congo
What is the population of the country by territory?
Administrative map of the DRC
The Urban network of the DRC

The military dimension of the Constitution of the Transition

Civil society’s contribution to building democracy in the DRC

Perceptions of democracy and politics in DRC