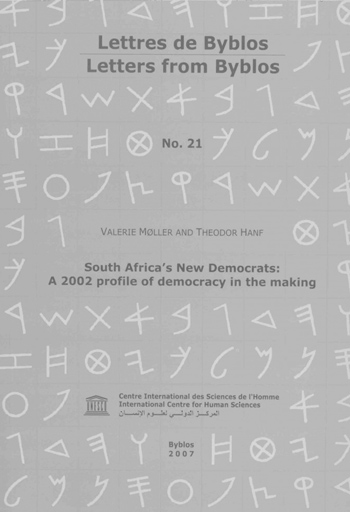 South Africa’s New Democrats:
A 2002 profile of democracy in the making
Valerie Möller and Theodor Hanf

“South Africa’s dramatic conversion to democracy has been heralded as a modern-day miracle. In former Nobel peace prize winner Archbishop Tutu’s words, it was “touch and go” whether all conflicting parties would participate in the first non-racial elections in April 1994. The “rainbow nation”, as the new South Africa liked to call itself in the first years of democracy, was heralded as a beacon of hope and enlightenment for Africa and the world.

Since 1994, South Africa has successfully conducted two further national elections that have been declared essentially free and fair. The country has emerged as a leading representative of the economic and political interests of developing countries and the South in the international arena. The question is whether living under democracy has influenced the manner in which South Africans see themselves, their country and the world around them”……..