Home » Publications » Democracy and the Paradoxes of Cultural Diversity
Publications 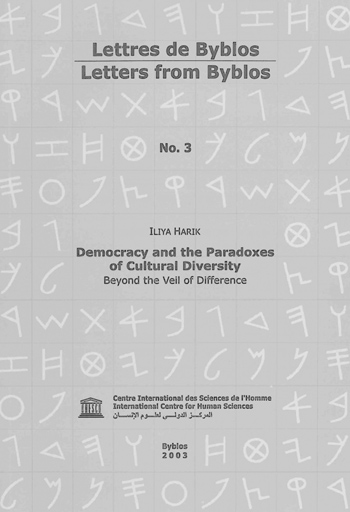 Democracy and the Paradoxes of Cultural Diversity
Iliya Harik

Democracy and the Paradoxes of Cultural Diversity:
Beyond the Veil of Difference
Iliya Harik

The object of this essay is to discuss the political and cultural dilemma involved in the globalization of democracy in a way which may ease our trepidations, though at the expense of shaking our profound confidence and of raising the bar of the other cultures by highlighting the similarities they share with us. But do we need this, considering our tremendously advantageous position? The answer is yes, first because our power is really not limitless, as we have swiftly learned after our invasion of Iraq. Second, our need to build bridges with the rest of the world is not as onerous as it at times seems to be. Third, showing that democracy has many faces and speaks with many tongues may help us understand ourselves better by understanding the others.

To start the inquiry under this perspective for openness is already to admit to downplaying the cultural gap thesis which separates us from other nations and arouses latent fears of establishing bonds of community with countries of diverse and different cultures from ours. This endeavor becomes challenging and unnerving when it is known that the countries we have chosen to examine belong to the Islamic world with whom we are currently embroiled in a bitter struggle. Being a more difficult test case, though, will make the effort for clarification the more useful.

Naturally, I cannot hope to do all this in a brief essay, but I shall make a start by exploring three cultural propositions that constitute political issues in our society and in theirs. These are (1) state-church relations   (2) the prevalence of patriarchal attitudes and (3) the issue of communalism

Let me hasten to say that this approach should not be seen as a genre of apologetic literature nor as an effort to improve the image of any nation or culture; there is enough blame in the world to share among all nations and enough to purge any “holier than though” attitude. Moreover, underlining our particular difficulties in the West is not meant to be an expose; it is rather done in the hope of making our opening to the rest of the world less culturally painful and more rewarding.

The first part of the essay will introduce some recent expressions of the strains we in the West are experiencing with the rest of the world, but especially in our efforts to understand and communicate with Islamic countries; then in the second part I shall give a lengthy analytical statement of the three above mentioned propositions as they apply to the West and the Islamic world. The third and final section will be devoted to highlighting the philosophical basis of intercultural relations. All three parts pertain to the complexity of understanding and dealing with the issue of democracy in an extended world of diversity.

The Comparability of Cultural Behavior:

Some Philosophical Foundations for Multiculturalism in the World Arena