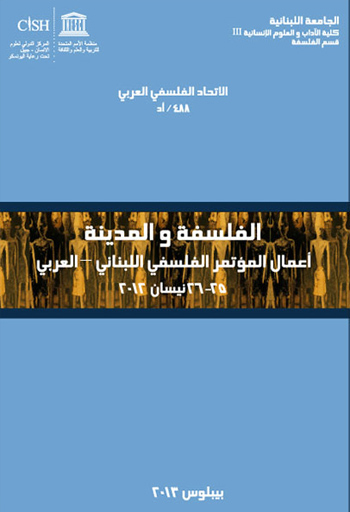 Over three centuries in Western Europe, from the Renaissance age until the Enlightenment, Philosophy fought the human society battle, and won it. It has proven its practical worthiness and suitability in facing the social human problems arising from life in the City.  This victory imposed   a new cultural reality that led to a change in the rules of the philosophical game, in the field of human thought.  After philosophy matured and rested on the throne of metaphysics and the divine affairs, with their arsenals, wandering in the spaces of the absolute, and with the fixed Truth floating in its orbits, dominating knowledge and certainty, it couldn’t accept the other, regarding this reality and its nature, but as a mistaken in logic, infidel in religion, and an enemy in politics, Philosophy became more modest and courageous.

Philosophy became more modest, when it descended from the highest transcendence, receded from the field of metaphysics, and took relativity as its only absolute, therefore; the truth fragmented, the certainty tolerated multiplicity of possibilities, and diversity of options, so that the other could find himself a legitimate place in the field of philosophy, an acceptable and recognized right.

Philosophy had the courage to change its trends, to keep pace with the human who is embodied and placed in the family, the environment, society and the City.  Accordingly, it dared to renew the “work tools” such as methods, terminology and concepts, and replace them in line with their emerging concerns, functions and fresh objectives.  As an independent cloak, it proceeded to occupy the civil affairs fields, the thing that made the religious attempts to contain it, or using it as a tool for ideological justification, some sort of Archaeology, that is related to the historical and museum heritage.

This modern situation, which the Western philosophy wore, imposed challenges on the Arabic culture, therefore; the Arab philosophy thought responded in different models, varying from self-isolation, avoidance, fearing the authority of abstract, simulation with no independence, to coping with the dare to create.  All these various philosophical responses, with their different weapons and strategies, were engaged in this battle, waiting for two happenings: either the expected defeat for some, or participation in the assured victory for others.

Within this framework of our vision of the status of philosophy, the “Arab Philosophical Union” suggested the subject “Philosophy and the City” to be the main title for the sixth conference, which was held in Tripoli (Lebanon), between 25 and 27 April 2012.  The main concern when choosing this subject was the“City”. There were two philosophical approaches that made us choose the subject, the first is Western, where Aristotle put an Anthropological formula, as a start for each philosophical research that studies the real human, which says that “the real human is civic by nature”.  The other is Arabic, where Ibn Khaldoun preceded the Greek phase, adding that “the human being is civic by nature, which means that he has to socialize, that is the city”.  Between the two approaches, and what followed of cultural, global and advanced history eras, the City has gained big share of the philosophical thought production, varied from looking into the organized human society through heaven and terms of eternal salvation, under the divine will, to looking into it through earth, and terms of social doctrine, as per the ability of the brain to determine the mechanisms of peace within the society, the laws of rights and duties in and between states.

One of the “Arab Philosophical Union” goals is to go through the greatest human problems on this earth, questioning the Arab philosophers and thinkers of their findings, doing this hard work, which without it, there wouldn’t be any importance or role for philosophy in the human culture.  As part of the “Union” goals also, is to involve intellectual, cultural and academic institutions in these tasks, for the humanitarian status, its terms and goals, all related to destination and hope as much as the thinkers and “mind workers” seek self-motivation to reach salvation, which doesn’t come true unless the man himself is the reference to be questioned about it, whether this promise was descending from heaven, or coming out from earth. Accordingly, the Lebanese University has participated in this conference through the Department of Philosophy, in the Faculty of Arts and Humanities – Third section.

As for the “International Center for Human Sciences” – Byblos (Lebanon), its participation in this conference, and its assistance to make it happen, lies under the same purpose, and also on the other side, as a response from the Center to the round table conclusions, that was held by the United Nations Educational, Scientific and Cultural Organization (UNESCO) in Paris on 21 June 2011, entitled “Democracy and Renewal in the Arab World”.  It urged universities, cultural and scientific institutions in the Arab world, to participate in carrying out researches, and to hold intellectual conferences about this subject, aiming to flowering ideas, proposals that lead to spread and consolidate the Democratic culture in the Arab societies, to enhance their chances of peace, and good governance.

Hopes to continue and deepen the cooperation and coordination among the cultural forces, in Lebanon and the Arab world, in order to promote the philosophical thought, consolidate criticism and creative sense in the Arabic culture.

Philosophy and the City

Session One : Philosophy and the City : The Concept
Our philosophers and the City / The Greek City (Dr. Ali Omlil,  Ambassador of the Kingdom of Morocco in Lebanon)

Session Two : Philosophy and the City : In the contemporary concept
From the philosophy of the city to the universality of philosophy (Mr. Motaa Al Safadi, Syria)
The return of the Socratic dialogue in the twenty-first century: Is it possible now? (Dr. Majdi Abdel Hafez, Egypt)
Philosophy and friendship or the crisis of Universal (Dr. Musa Wehbe, Lebanon)

Closing Session : Suggestions and Recommendations
The final statement of the conference