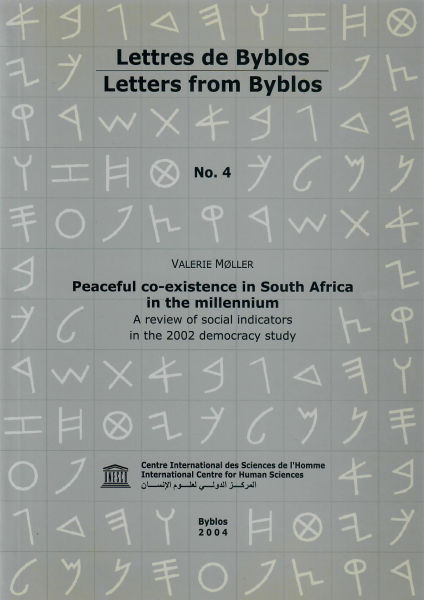 Peaceful co-existence in South Africa in the millennium
Valerie Møller

In the new world order, South Africa has emerged as a beacon of hope that it may be possible for people from different ethnic, language and religious background to live together in harmony. South Africa has successful achieved a negotiated settlement between black and white. It may be the first example worldwide of a government voluntarily giving up power to accommodate the oppressed minority in a power-sharing agreement . The first open elections were held in April 1994. In 2003 the country is preparing to go to the polls for its third national elections.

How successful has South Africa’s mode of conflict regulations been? How have the groups once engaged in a low-level war come to terms with living and working side by side? More importantly, how happy are South Africans in their situation? How do they rate their situation and their prospects for their own and their children’s future in the new democracy?

In the South African case, unlike in South East Asia, political freedom was achieved in advance of economic emancipation. The new government would need to convince a patient electorate that the material rewards of democracy would be forthcoming.

To shed light on the South African experience this paper examines select indicators from a survey conducted in 2002 under the auspices of the Centre International des Sciences de l’Homme in Byblos, Lebann. The study follows on the seminal study by Hanf and colleagues (1981) on South Africa’s Prospects for Peaceful Change in the late 1970s and a study of first-time voters’ experience in  the first democratic elections of 1994 (Møller & HHanf, 1995).