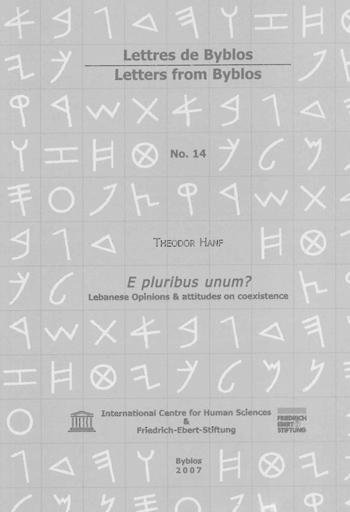 “Representative surveys during the war and civil war – in 1982, 1984, 1986 and 1987 – showed the clear desire of all Lebanese, regardless of religious community, to live together peacefully in the same country. In the midst of war the most hopeful consequence of precisely this phenomenon was the emergence of a nation.

Twelve years after the end of the war, Lebanon was firmly under Syrian control. Despite, or because of, this, a survey in 2002 confirmed the earlier findings. The Lebanese accepted themselves as they are: different from, but dependent on one another. For them coexistence is not only possible, bur enriching – a sceptical nation, but a nation.

Has this changed since the withdrawal of the Syrian army? An empirical survey of the economically active population conducted in early 2006, a few months before the Israeli war against Hezbollah, sought to explore this question”…….

Contents:
Fear of the future, cautiousness, powerlessness: Psycho-social sensitivities
The crisis of entrepreneurship: Attitudes to the economy and society
A nation of believers
Kinship: Attitudes to family and society
Strata, communities and identity
Snapshots of a political system and political orientations
Democrats by conviction and even more so by necessity
Perspectives of coexistence