Home » Publications » A Plurality of Nations?: Malaysia’s Quest for a viable Polity
Publications 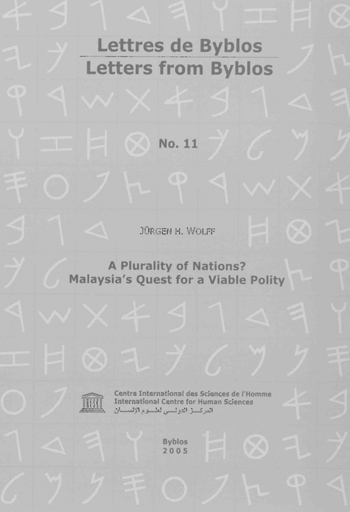 A Plurality of Nations?: Malaysia’s Quest for a viable Polity
Jurgen H. Wolff

A Plurality of Nations?: Malaysia’s Quest for a viable Polity
Jurgen H. Wolff

“Malaysia has long been regarded as a fascinating topic of scientific enquiry. Its population, composed of three main groups of which two – the Chinese and the Indians – belong to the most developed civilizations of Asia, has managed to live peacefully together, its economic success, despite qualifications, is remarkable and its “Vision 2020” programme seeks to make the country a fully developed industrialized nation by that date; its political system is widely regarded a model case of constitutional engineering that manages ethnocultural diversity without undue repression.

The following is an attempt to describe and evaluate Malaysia’s political system with particular emphasis on interethnic and interreligious relations in terms of these generally accepted norms of good governance and human rights.

This study is organized as follows: the three chapters deal with the plural society, the political system, and minorities facing the challenge of radical Islam”…..

The Basis: Malaysia’s Plural Society
Historical background
The social construction of ethnic identity
Digression: Ethnic or religious identity?
Wealth, poverty and the ethnic division of labor: Still valid after all these years?

Minorities at risk? Interreligious and interethnic relations in the light of the threat of radical Islam
Islam and other religions: The constitution and its interpretation
Religions in Malaysia and their interrelation
Islam, Islamists, democracy, human rights and religious freedom in Malaysia
Counterstrategies – the example of the Catholic minority