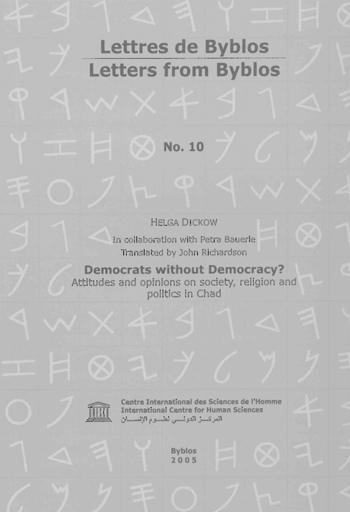 Democrats without Democracy?
Attitudes and opinions on society, religion and politics in Chad
Helga Dickow

In collaboration with Petra Bauerle

“Chad is one of the poorest countries in the world: 80% of its population lives below the poverty line. Since independence, it has known virtually only authoritarian government and civil war. A part from the occasional negative headline, such as the three-year captivity of Francoise claustre, a French archaeologist held in the Tibesti Mountains in the mid-1970s, the world paid little attention to Chad”…….

Power as seen by those who do not have it
Perceptions of political and civil society elites outside the inner circle
Chad – a democracy?
The impotence of the opposition
Dependent loyalty
Elections and referendums
The “Deby System”
Chances of changing the system?
Views of the political order after a change of power
The responsibility of the outside world
Perceptions of conflict
Fear
Too soon for democracy?
Summary

Unsharp social cleavages
Chadian attitudes and opinions on society, religion and politics
A survey in four cities: N’djamena, Sarh, Abeche and Mongo
Chadian society as reflected in the sample
Fear of the future, trust, caution and powerlessness: psychosocial attitudes
Social and economic perceptions
Religion, ethnicity and identity
Political orientations
Opinions on the political order
Perceptions of differences and coexistence
Life in the future